Please watch the short video below to learn how this site will help you find your next home!

Welcome to Toms River; the county seat of Ocean County, NJ, and the gateway to the famous "Jersey Shore"! Located just over an hour south of New York City, an hour east of Philadelphia and an hour north of Atlantic City, Toms River is literally the ideal location for living in New Jersey.

Demographically, you will find each section of Toms River has a variety of neighborhoods with a variety of home styles and "levels"; i.e., "entry level", "move up" and "higher end" homes.

The Village of Toms River

Also known as "Downtown Toms River" and the "Country Club" section of Toms River, the Village of Toms River basically runs from the Toms River, itself, north up the Garden State Parkway (Route 9), then turns and runs east along Route 37, before heading south back down Washington Street.  Some of the more familiar neighborhoods in this section of town include; Cranmoor Manor, Point O'Woods, Hickory Manor and Fair Acres.

Originally home to chicken coops and tree farms, the North Dover section of Toms River now houses some of the finest estates and luxury homes in town.  Generally considered to run north from Route 571, between Whitesville Rd (527) and North Bay Ave, this "higher end" section of Toms River includes some of the following neighborhoods; Todd Road Estates, Bey Brook Estates, The Grande Woodlands and Tallymawr Manor.

Sharing more than just a zip code (08755) with most of North Dover, this section of Toms River lies west of the Garden State Parkway and south of Winding River Park.  Often associated with it's proximity to Community Memorial Hospital and/or the now defunct Ciba-Geigy property, some of the more familiar neighborhoods in this section of town include; Oak Ridge, Silver Ridge and Summit East.

The Beaches of Toms River

Last but certainly not least, are the beach sections of Toms River.  These lesser known beaches are no less spectacular than their northern and southern cousins but they are less crowded!  They include; Ortley Beach, Normandy Beach and the Ocean Beaches.

Move-In-Ready 2 BED/1 BATH ranch ideally located in the 55+ Adult Community of the Garden of Pleasant Plains. This charming home sits on a private cul-de-sac with a paver...

Looking for a home in a great 55+ community that has many amenities, then this 2 bedroom/1 bath Sarasota model in Holiday City Berkeley maybe the one. This home offers a ...

MOVE RIGHT INTO THIS LOVELY CAMBRIDGE II MODEL WITH NO REAR NEIGHBORS ON A PREMIUM LOT WHICH IS LOCATED IN THE HIGHLY DESIRED 24 HOUR GATED ACTIVE ADULT COMMUNITY OF LAKE...

COMING SOON! OWN YOUR VERY OWN BEACH BUNGALOW BY THE BAYJust a 1/2 block away from a private beach club- this picturesque craftsman style home, built in 2014 is located ...

Well maintained Lakeview model on oversized lot in desirable Holiday City West. Large sun room adds living space to the home and treed buffer lends privacy to the back ya...

Retire in class!! Stunning. Gorgeous. Remarkable. Impressive, are just a few words to describe this home. Most sought after Castle Harbor model fully redone and upgraded....

Coming soon No showings until 10/8 @ 11:00Am. Tastefully updated and Uber efficient! Some notable features of this home are a new tankless boiler and hot water heater (4 ...

Courtesy of RE/MAX at Barnegat Bay

One of a kind, 3 bedroom 2.5 bath expanded ranch w/ a modern touch. located in the lovely section of Pine Lake Park Manchester Twp. Come reap the rewards of this almost c...

Enjoy your morning coffee from your bonus three-season room overlooking the tranquil water view. Fully renovated inside and out with meticulous attention to detail and to...

Looking for the perfect home in the perfect place? Chances are you'll want to check here first. 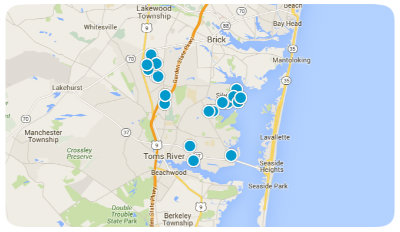