How does an Agent recognize an opportunity?

If you want to be a successful real estate professional in Toms River, NJ, one of the things that you’re going to have to do is be able to recognize opportunity when it knocks. An opportunity to fill a much needed gap in the market or to change your business to take advantage of a trend could mean the difference between a little bit of success and a huge amount. But you must know what these opportunities look like so that you can grab them when you see them. Here are three ways to recognize an opportunity.

One of the earmarks of a good opportunity is that it doesn’t sound too good to be true. A true opportunity that has great potential isn’t going to be perfect when you encounter it. You’re going to have to do the work to make it into a successful strategy. However, one thing that it should have is potential. If you can see it becoming a great idea in the future than it might just be the opportunity that you been looking for but just be sure that just because an idea is imperfect that you don’t discard it completely.

It Is Built on Previous Failures

The best ideas are the ones that have evolved over time because they have been honed through past failures. If an idea has been through the furnace of discovery, there is a much greater chance of it working when you decide to implement it. In other words, you might want to give an idea time to fail a few times before you decide to run with it yourself, because otherwise, you’ll be making all of those mistakes yourself and that won’t result in the grand opportunity the you’re envisioning.

Some of the best ideas that have ever been thought of were completely different takes on what a product or service was originally intended for. The idea might’ve been a failure as it was intended but it sparked an entire new thought process and brand-new applications. These accidental inventions ended up being something completely different because someone had the ability to see past the original application.

For example, both the slinky and silly putty toys were intended for industrial application. However, they failed as intended and instead became some of the most popular toys ever invented.

Looking for more good opportunities for your real estate business in Toms River? 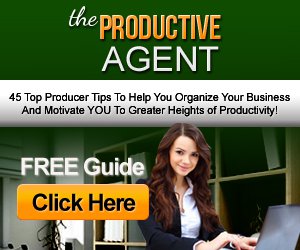 Pick up a FREE copy of The Productive Agent: 45 Top Producer Tips To Help You Organize Your Business And Motivate You To Greater Heights Of Productivity.